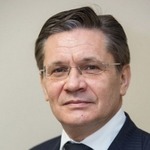 - We have prepared a revised schedule approved by the Ministry of Industry and Trade on construction of the lead multipurpose icebreaker, the first and the second serial ones with the delivery in 2019, 2020 and 2021 accordingly.

They are supposed to be enough for current volumes of shipping in the Northern Sea Route (through 2022). To reach the target of 80 million tonnes by 2024 the decision (RF Government’s decision - Ed.) on construction of the third and the fourth serial icebreakers is also under implementation. Interdepartmental consultations have been held. We have determined the cost and the implementation period with the delivery scheduled for 2024. The third and the fourth serial icebreakers are to be delivered in 2026 (end of 2025).

The traffic of 80 million tonnes and round-the-year shipping on the Northern Sea Route will encourage deployment of four mid-power icebreakers by 2024. The will start operation in the Gulf of Ob, in the western seas. More powerful icebreakers, the Yamal and the 50 Let Pobedy, as well as new multipurpose icebreakers can be involved on eastern routes, in heavy ice of East Siberian Sea.

Yet, the capacity will be limited and we will deploy the Leader icebreaker by 2027. The decision on its construction and budget financing has already been made. The ship will be built by Zvezda shipyard.

By 2024, we should have not two but four mid-power icebreakers. I would like to emphasize that their financing is full commercial, without involving budget resources. Together with the Ministry of Industry and Trade we should select shipyards able to meet the deadline. It is crucial for us because the financing is commercial and any delay presents a risk for investment projects and for financial indicators of the state corporation. In this respect we … are ready provide every assistance to the Ministry of Industry and Trade.

We understand that the lead Leader icebreaker should be followed by serial ones. The time of their introduction depends significantly on the growth of eastwards shipping after 2025 rather than on forecasts.

Transcript from the Government meeting on the Arctic development issues.