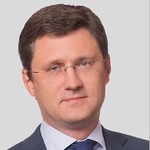 A programme on promotion of shipbuilding and equipment for shelf development has been prepared by the Ministry of Industry and Trade together with Rosatom in order to develop the NSR scientific and production base. The programme was approved by the Government of the Russian Federation in March 2017. It covers the construction of nuclear-powered icebreakers. Besides, Zvezda shipyard is to be awarded with a contract on construction of Arc7 gas carriers for servicing Arctic LNG 2.

One more important aspect of LNG production development is the construction of LNG transshipment terminals in Kamchatka and Murmansk. They will ensure maximum use of the Arctic potential for reduction of operation costs with transshipment of LNG from Arc7 ships to non-Arctic gas carriers.

From report on LNG production and exports delivered at RF Government meeting.